Being attached too much to someone or something, will only lead us to suffering. Especially when we truly believe that she’s THE ONE, but things don’t work out the way we expected.

So, what is oneitis depression?

What’s the psychology behind it?

And what can be done, to stop that unhealthy attachment?

What is oneitis depression?

Oneitis depression is basically depression, caused by an unhealthy attachment to one particular woman, for whom we deeply feel for.

The signs and symptoms of male depression are generally:

It can influence our lives in so many ways.

And all that, because of a woman we’ve been fantasizing about, for too long.

What’s the psychology behind it?

Since we believe that she might be THE ONE, we want to make sure, that it will play out well, and we would do anything to be with that girl. Or just to be around her.

We would put our lives on hold for her.

We would say NO to any even or friend invitation, just to spend time with her.

Also, we’d modify our schedule any time of the year, just to be in the same group of friends with her.

We would even bring the stars down for her, as it is described in many classical romantic movies.

BUT, she wouldn’t do the same.

What’s more, most likely she doesn’t consider us AT ALL a potential partner.

And maybe we are even invisible in her eyes.

Can you see where that oneitis depression comes from?

It’s simply falling in love too fast with an illusion, which we’ve built up over the months or years.

It’s something we’ve accumulated, something which is based on the projections of our fantasies.

Also, totally ignoring her behavior, and constantly validating with logic and rational arguments all these signs, why she might still like us, but wouldn’t admit it.

How to stop the unhealthy attachment?

1. Recognize that it’s an unhealthy attachment

First we have to recognize that there is a problem, and ONLY AFTER that we can start fixing that problem.

So, start seeing reality as it is.

From where do these unhealthy attachments come from?

You can see it all over the media.

It’s in the songs we are listening to.

It’s not only in the Hollywood movies, but also in the stories of the classical movies.

And also, consuming too much social media defines us our new reality.

As Simon Sinek and Tristan Harris put it:

We are conditioned to believe, that there is THE ONE.

That’s what men have been fantasizing about for so long.

Combine that with a world, where the highlight became the new reality, and you have the perfect formula for depression.

It’s such a bad mindset to be in. We need to step away from the belief of “You are the one” and “You complete me”.

It’s important to know, that we need to walk into a relationship where we are already complete, and she only adds to that.

And it’s important to recognize, that falling in love with someone, who wouldn’t show mutual excitement, is simply unhealthy, and will lead us to suffering.

Which takes us to the next point.

2. Learn to respect yourself enough

You really need to start respecting yourself more at this point.

If she doesn’t invest at all, then don’t be willing to put your life on hold for her.

It HAS to be mutual investment.

I can’t emphasize that enough.

If she is not showing mutual interest or excitement, then simply mirror her behavior.

Stop caring about her.

At the same time, stop hoping and fantasizing about you being together, or how happy you’d be if you had her.

We got to respect ourselves enough, to tell no, if they don’t reciprocate, no matter how hot or perfect she might be in our head.

Always look at her actions, and if she doesn’t seem to invest equally, then respect yourself enough and stop.

Simply take it as a NO, don’t take it personally, but understand the message behind her behavior.

Because if we don’t see that she’s not into us, if we keep ignoring reality, and we keep chasing her, then we are just making a fool of ourselves. Wasting months or years from our lives for someone, who wouldn’t even do 5% of what we were capable of doing for them.

So start respecting yourself more, and start seeing reality through a filter, that doesn’t have those fantasies to it.

3. Focus on yourself and your life

Now that your center of focus is her, you have to do something about it.

As I said in the beginning, being attached too much to someone (or something), will lead you to suffering.

And that’s why you need to have more legs under the table.

I said this so many times, but I’m going to say it again.

Focus on having a vivid goal in front of you.

Go out with your friends.

Nurture many things in your life, so if one leg breaks under the table, the whole structure won’t collapse.

You can hear it everywhere, to focus on yourself and on your life.

But are you actually doing it?

Is it just an information for the future you, or did you actually take this step?

Which brings me to the next point.

If we lack options, then eventually, we will invest more energy in that ONE option that we have right now.

That’s why we are attached so much.

Which, again, will only lead us to suffering.

But by creating options, we don’t break down, if one foot of the table gets knocked out.

Women DON’T want to be treated as a oneitis.

They don’t want you to treat them like they are your everything.

Because the moment you start to over pursue for a longer period of time, they will start to lose interest, and the attraction will disappear.

They want a man, whom they can look up to, and who is a great leader.

They want a confident guy, a guy who loves them, who respects them, and who wouldn’t put them on a pedestal.

Remember, we only value the things in which we invested. And if you are too easily available, then that’s just an extreme, where she doesn’t have to invest anymore to have your attention.

Also, playing the unattainable for too long, is just the other extreme of the spectrum.

So, try to never get into extremes.

It’s a hard balance, which you’ll start to feel better over time.

But in any case, never go into extremes, and never make anybody your oneitis.

Thank you for being here and reading through.

If you want to know how to stop caring for the wrong person, or in other words, how to forget an ex that isn’t healthy for you, then get a free copy of my PDF training down below.

A complex training about how to stop caring for the wrong person in your life and how to forget your ex that isn’t healthy for you.

Get a Free Copy

You can get instant access to it by simply subscribing to my newsletter. 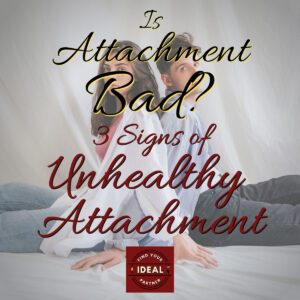 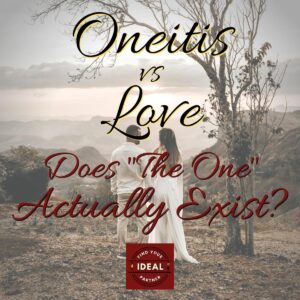 Oneitis vs Love – Does “The One” Actually Exist?